Feed That Brain: The Land Where The Blues Began 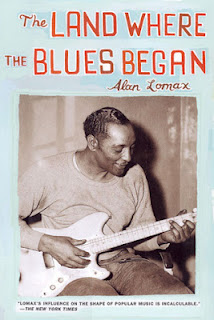 If you want to eschew the superficial, avoid cliché, imbue authenticity into your work and, above all, write well - then it is vital to constantly fill your brain with new stuff. Sometimes you do this as part of organised research, sometimes just through the process of living in the world but, for me, the most fun is a proper non-fiction book. As in all things some books are more crunchy and nutritious than others so I thought I'd pick out my personal favourites.

The Land Where The Blues Began
by Alan Lomax

There aren't that many folklorists who manage to generate an 800 page FBI file but Alan Lomax was never one to keep his mouth shut - even when the prevailing orthodoxy said he should. He spent a career finding and recording music - not to exploit it for his own ends but to preserve it for the future - and documenting the lives of the people that produced it.

The Land Where The Blues Began is Lomax's exploration of the Mississippi Delta and it's role in producing the most influential musical form of modern times(1). It's beauty as a brain feeding book is because it works at so many levels: -

As a general history of the blues - obviously - but also providing portraits of some of the extraordinary characters in and around the blue's scene. If you're writing fiction you can never read too many good descriptions of real people the more you are exposed to the human race in its astonishing variety the truer your fictional characters will be.

On top of that the book is a travelogue of the Mississippi Valley in the 1940s giving insights into the sights, smells, living conditions and social attitudes of the time. It was from this book that I first learnt about Beale Street and the Castle of Missing Men(2). It also gives a look, just for the icing on the cake, into the mindset of a southern born radical minded white man, his honesty as a reporter extending to his own reactions and habits of mind.

And it's quite short too and well written.


(1) It ain't jazz okay although that's probably the second most influential musical form of modern times.
(2) Beale Street is like a microcosm of Black American history in that you keep peeling away layers of indifference, racist historiography and downright suppression to find amazing stories - Robert Church anyone?
Posted by Ben Aaronovitch

Hunh, can't believe that I am the first to comment on this...

The Lomax Collection is an amazing resource and archive - his recordings are now available on Amazon - hundreds upon hundreds of songs and their variants.

Lomax was an amazingly dedicated songfinder, and thanks to him there are songs that will never be forgotten, because of him and his tape recorders.