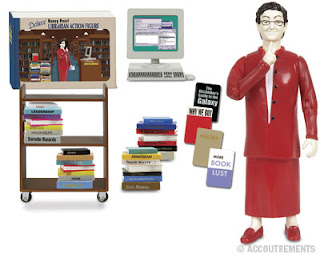 Nancy Pearl, the only non simian Librarian to have her own action figure, has put Midnight Riot (aka Rivers of London) at the top of her summer reading list.
Although I'm willing concede that my pre-eminent position may have something to do with my fortuitous double A surname.
You can find her glowing recommendation here and, should you so wish, listen to her radio programme on the NPR website here.
Posted by Ben Aaronovitch No comments:

I will be partaking in the Forbidden Planet Group Signing on the 23rd of June from 1800-1900 - details are here.
Posted by Ben Aaronovitch 1 comment:

I was once again contemplating the problem of pushy minor characters and how they can encrust the bottom of your narrative like barnacles when this particular earworm arrrived in my head and refused to leave. Because misery loves company I publish it for your delectation.

With apologies to Paul "Gundwani" Simon.

The problem is all inside your head
She said to me
The answer is easy if you take it logically
I’d like to help you in your struggle
To be free
There must be fifty ways
To ditch your character.

[CHORUS]
Just nuke them from space, Grace
Make a new plot, Dot
Pretend they got lost, Joss
Just get yourself free
Put em on a bus, Gus
You don’t need to discuss much
Just let them fade, Jade
And get yourself free

She said why don't we both
Just sleep on it tonight
And I believe in the morning
You'll begin to see the light
And then she edited the chapter
And I realised that she was right
There must be fifty ways
To kill your character.

[CHORUS 3]
Have them fall ill. Jill
Stuff them in fridge, Bridge
Have a psycho make a call, Paul
And get yourself rid.
Marry them off, Joff
You don’t have to explain much
Nail them to a tree, Dee
And get yourself free.

on Over Soho will be available for download from the 21st of July. It will be read, as was Rivers of London, by Kobna Holdbrook-Smith who not only does a much better Nigerian accent than me but also a better Scottish, Manchester, Essex and, if truth be told, Cockney wide boy.
He's been in Little Britain and done time at the National and the Globe - which makes him a proper actor. He certainly does a good job with Peter.
Posted by Ben Aaronovitch 3 comments:

Just a note to say that my agents have concluded their negotiations with French publishing house J'ai Lu and that Rivers of London, Moon Over Soho and Whispers Under Ground will be published in translation - probably next year.

I'm very pleased, partly out of sheer meglomanical delight but mostly because now I have a good excuse to go to Paris on the Eurostar. 'It's for business - honest.'
Posted by Ben Aaronovitch 4 comments:

Reviewed in Time Out! 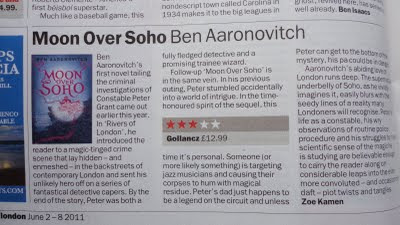