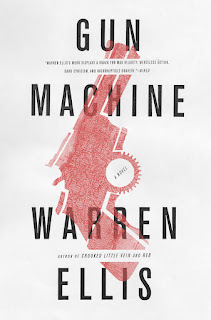 Gun Machine by Warren Ellis
This morning Detective John Tallow was bored with his job.

Then there was this naked guy with a shotgun, and his partner getting killed, and now Tallow has a real problem: an apartment full of guns. Old guns. Modified guns. Arranged in rows and spirals on the floor and walls. Hundreds of them.

Each weapon is tied to a single unsolved murder. Which means Tallow has uncovered two decades' worth of homicides that no one knew to connect and a killer unlike anything that came before.

Tallow's bosses don't want him to solve the case. The murderer just wants him to die. But there's a pattern hiding behind the deaths, and if Tallow can figure it out he might even make it out alive.


Getting free books through the post has got to be one of the best perks of being a published author. Especially when you didn't even know the book existed beforehand. See the cover, read the blurb, check the author - what's not to like?
Posted by Ben Aaronovitch No comments:

At Last The Truth! What Do You Mean I Don't Get a Bulk Discount?

I never intended this series of posts to be so long but the more I thought about the influences on Rivers of London the more I found. So relax, this is possibly the second from last in the Now At Last! series... unless I think of new stuff or just decide to ramble on indefinitely.

The 87th Precinct Stories
Ed McBain's novels of the detectives of an imaginary precinct of an imaginary city serves as the elephant in the room for Peter Grant, Nightingale and all the other London flat-foots that populated my books. Not only to the blind men who take away different impressions of the beast but also because you just can't get that fridge door to close properly when he's in there.

In an essay at the start of my old edition of Cop Hater Ed McBain explains why he chose police detectives over lawyers, private eyes or little old lady amateur sleuths: Disbelief must be overcome, first by the author himself, then by the reader. This isn't the case with a police detective. He is supposed to investigate murders.

It's also clear, from the same essay that the fictional city is as a lovingly wrought secondary world creation as any that has graced the pages of a three volume epic fantasy. The police procedure used by McBain's cops is closely modelled on actual American procedures (of the time) explaining why the city maintains a sense of reality despite being entirely imaginary.

The Curse of Chalion

Lois McMaster Bujold was careful to create a completely consistent theology to underpin this brilliant fantasy novel. The book itself can be read, if your feeling suddenly come over all English teacher, as an examination of what it would be like to be a saint in a universe where the gods were real and yet strangely powerless in the face of free will.

What's impressive is the amount of effort Bujold has taken to think through the consequences of her world building and the subtle way she shows the separation between the practicalities of everyday religion, the rarefied theories of the professional theologians and the hard grind, uncertainty and stark existential terror of trying to do your god's bidding.

Heroes who work for a living

The Sweeney
Or the series that launched a thousand 'guvs'. When a police officer calls his senior officer 'guv' it is as likely to be because he grew up watching The Sweeney as to any long tradition in the Metropolitan Police.


The Sweeney, created by Ian Kennedy Martin, not only invented the 'guv' it was the first British policier which gloried in the working class culture of the police. Dixon had always been annoying differential and the boys in the Z-Cars knew their place but give Reagan and Carter some lip and it didn't matter who you thought you were - you was in trouble. There's more than a hint of Regan and Carter in Peter Grant, some of hidden under a respectable 21st Century vaneer and some of it proudly displayed. Because you're going to make something of that? Are you? Are you? Didn't think so?

The thing I've always liked about Len Deighton's heroes is their air of understated competence. Even when they do something extraordinary, such as snatch a threatening gun out of the hands of an opponent it's described in the same tones that a professional blacksmith would apply to bending metal. I'm probably misquoting but I remember a sequence that goes:- he was standing too close to me, within the range where it becomes possible to take weapon out of someone's hands before they can fire. The clue is the name given to the skill-set required by a professional spy - trade-craft.

It's by making the extraordinary skills of a spy ordinary that Deighton highlights what we often overlook - how extraordinarily skilled many of the people around us our. Not just the obvious candidates, the doctors, nurses, electricians but the less obvious geniuses like crane drivers and health inspectors. I wanted Peter to be like a Deighton spy, competent (most of the time) in an understated way.

There are still a couple of influences that have as yet gone unlisted. Because there has to be a finite limit even to my capacity to waffle I thought I'd give them a quick mention before moving on to the final part of At Last The Truth! They Wrote What?

London: The Biography by Peter Ackroyd
The role of this book must be fairly self explanatory.

Created by Dennis Spooner this was one of a number of supernatural/SF shows of the late 1960s early 1970s, Jason King and UFO being two others, that I grew up watching live or in later repeats.

Lynda La Plante redefined the British crime thriller in the 1980s by taking it away from the boys (mostly the Kennedy Martin brothers) and letting the women step up to their rightful place in the genre.

In Widows those belligerent but cowed working class women, previously only seen timidly opening the front door to the policeman de jour, finally get out of the kitchen to seize the plot, the moment and the loot.

Prime Suspect gave UK TV its first credible female murder detective as the fallible yet determined DCI Tennison got the job sorted in the teeth of institutional sexism.
Posted by Ben Aaronovitch 2 comments:

Read by the insurmountable Kobna Holbrook-Smith these editions are essentially the same as the British English versions only with some snazzy new covers added. I particularly like the Whispers Under Ground cover with its proper grown up crime novel vibe. One place you can download is here.
Posted by Ben Aaronovitch 1 comment:

It's international book week. The rules: Grab the closest book to you, turn to page 52, post the 5th sentence. Don't mention the title. Copy the rules as part of your post.

Those are the two most complete studies that have been made so far.
Posted by Ben Aaronovitch 3 comments:

The Blackwell's event is not Wednesday 12th September but in fact Friday 12th October.
Posted by Ben Aaronovitch No comments:

After five minutes off the relentless round of self-publicity that is the lot of the modern author continues. Although this month I seem to be a supporting act for much of it.

Goldsboro Books will be celebrating a visit by Deborah Harkness (Shadow of Night) and I shall be there along with my mate Suzanne McLeod for free drinks, canapés and gossip.

Blackwell's in Charing Cross Road are hosting a chat between me and author Sara Sheridan where we shall be discussing writerly type concerns and taking questions from the audience.

Email Amelia to reserve a space (they like to know how many people are coming).

ADDENDUM: 10/09/12 - the Blackwell's event is in October D'oh!
Posted by Ben Aaronovitch 2 comments: