Me and Suzy at the Lewisham Literary Festival

Suzanne McLeod and I will be at the Lewisham Literary Festival where we shall be shilling... I mean answering questions about our books. It all kicks off at 3 pm on Saturday at St Swithun's church hall, directions from Hither Green are below -

This the website for the festival and this is a place to book tickets.

The trouble with taking a smug superior attitude is that you can't always be sure it's justified and if it isn't then one leaves oneself open to ridicule - and that just wont do. Still I was watching the series finale of Falling Skies and found myself thinking that if the irony wasn't deliberate than the makers of the series must be dumber than pig shit. 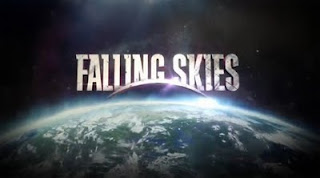 Falling Skies follows the adventures of the survivors of an alien invasion as they attempt to preserve what's left of the civilian population and harass the invaders. It's an enjoyable show although I suspect that anyone who'd actually fought with an insurgency will want to watch the combat sequences with the sound track replaced by the chase music from Benny Hill.

Like I said the irony of the show didn't really sink in until the last episode. The location, Boston and the name the survivors take 'The 2nd Massachusetts' are all chosen to evoke folk memories of the American Revolution and just in case nobody noticed the historian/militia leader who serves as the series hero explicit references the revolution when they face off against an alien attack. I didn't record the programme so I can't give you the details of the speech but I remember something about militias striking a blow for freedom against a more powerful foe.

The thing is the though; if you're looking for an analogy - a brave people facing a doomed battle against a technologically superior enemy who seems intent on wiping them out and stealing all their land- it isn't the American War of Independence. Right continent wrong protagonists.

The makers of this series have to be aware of that - don't they? They can't really be that historically unaware - can they?
Posted by Ben Aaronovitch 4 comments: