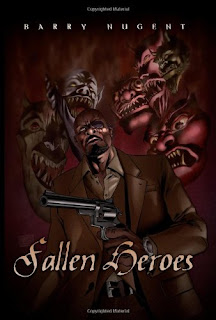 
A computer disk no one can read but everyone wants. An orphan whose visions of death and destruction hold the key to his past and future. A pair of master thieves hunted for a crime they did not commit. An investigator of the unknown, a stalker of demons. A government agent whose murder investigation will bring him face to face with a tragic mistake from his past.

All connected, all unwitting pawns in a plan set in motion over nine centuries before their birth. Pursued across the globe by enemies both human and supernatural they must overcome their mistrust of each other and uncover the truth before it destroys them and unleashes a malevolent and ancient evil upon an unsuspecting world.
Posted by Ben Aaronovitch No comments:

Went to see ALPHA PAPA at the cinema with the Evil Monster Boy(1) and while I don't really like the comedy of embarressment I was happy to make an exception. As we were on our way home the EMB pointed out that the filmakers had avoided the main pitfall when turning TV into cinema - that of trying to big everything up. Instead Alan Partridge continues to be, in his own imagining, a big man in a small world. Recomended.

(1) And he's sodding enourmous these days so probably I'm going to have to stop calling him that - in  public at least. 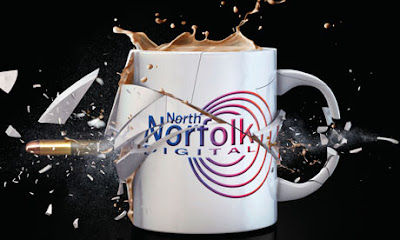 One sequence that had me in hysterics was Alan lip syncing to Roachford's Cuddly Toy while driving into work. The EMB couldn't understand why I was laughing so hard and singing along to the chorus but you really have to be sad white boy in your late forties/early fifties to understand why it was both joyous and heartbreaking.

So to prolong the moment here is Roachford's Cuddly Toy which I also declare to be Peter Grant's official theme tune...

Now that the launch is done it's back to the writing of book 5 and that means - research!

The Letters of the Younger Pliny

A prominent lawyer and administrator, Pliny (c. AD 61-113) was also a prolific letter-writer, who numbered among his correspondents such eminent figures as Tacitus, Suetonius and the Emperor Trajan, as well as a wide circle of friends and family. His lively and very personal letters address an astonishing range of topics, from a deeply moving account of his uncle's death in the eruption that engulfed Pompeii, to observations on the early Christians - 'a desperate sort of cult carried to extravagant lengths' - from descriptions of everyday life in Rome, with its scandals and court cases, to Pliny's life in the country.

Wildwood: A Journey Through Trees by Roger Deakin

Roger Deakin's "Wildwood" is a much loved classic of nature writing. "Wildwood" is about the element wood, as it exists in nature, in our souls, in our culture and our lives. From the walnut tree at his Suffolk home, Roger Deakin embarks upon a quest that takes him through Britain, across Europe, to Central Asia and Australia, in search of what lies behind man's profound and enduring connection with wood and with trees. Meeting woodlanders of all kinds, he lives in shacks and cabins, travels in search of the wild apple groves of Kazakhstan, goes coppicing in Suffolk, swims beneath the walnut trees of the Haut-Languedoc, and hunts bush plums with Aboriginal women in the outback. Perfect for fans of Robert Macfarlane and Colin Tudge, Roger Deakin's unmatched exploration of our relationship with trees is autobiography, history, traveller's tale and incisive work in natural history. It will take you into the heart of the woods, where we go 'to grow, learn and change'. "Enthralling". (Will Self, "New Statesman"). "Extraordinary ...some of the finest naturalist writing for many years". ("Independent"). "Masterful, fascinating, excellent". ("Guardian"). "An excellent read - lyrical and literate and full of social and historical insights of all kinds". (Colin Tudge, "Financial Times"). "Enchanting, very funny, every page carries a fascinating nugget. Should serve to make us appreciate more keenly all that we have here on earth ...one of the greatest of all nature writers". (Craig Brown, "Mail on Sunday"). "Breathtaking, vividly written ...reading "Wildwood" is an elegiac experience". ("Sunday Times"). Roger Deakin, who died in August 2006, shortly after completing the manuscript for Wildwood, was a writer, broadcaster and film-maker with a particular interest in nature and the environment. He lived for many years in Suffolk, where he swam regularly in his moat, in the river Waveney and in the sea, in between travelling widely through the landscapes he writes about in "Wildwood"

Tales of the Country by Brian Viner

Brian Viner and his family had enjoyed much about their nice little middle-class patch of north London, but gradually realised they were suffering from a severe case of 'metropause' - the desire to swap the hassles of London life for the serenity of the countryside. After a long search they found the house of their dreams in rural Herefordshire. But is the quiet life all it's cracked up to be? More importantly, where does one go to get a decent cappuccino? 'A Year in Provence' with less sunshine but more laughs, "Tales Of The Country" is a wonderfully entertaining and heart-warming account of the Viners' adjustment from town to country. Full of anecdote and character, it is a superbly beguiling book about what is really important in life, and the joys and trials encountered along the road towards it.
Posted by Ben Aaronovitch 6 comments:

My Events at NIne Worlds - the Bare Facts!

Nine Worlds is a brand new convention here is it's website... it will be held on the weekend of the 9th to 11th August at the Renaissance Hotel near Heathrow.

I shall be making several appearances - here is the list.


3:15 PM to 4:30 PM
New House, Old Ghosts: Reinventing Mythology & the Supernatural
On the panel will be me, Kate Griffin, Barry Nugent, Lou Morgan and Jo Fletcher


NEW HOUSE, OLD GHOSTS: REINVENTING MYTHOLOGY AND THE SUPERNATURAL FOR THE 21ST CENTURY Monster-making and mythbreaking: a panel discussing how and why we use myths, legends and folklore to tell stories about ourselves today.


Nothing's more fun than a really hissable villain, and Doctor Who's had more than its fair share of dastardly dudes and dames over the years. What makes a perfect villain? Is it the megalomaniac schemes? A catchphrase? Or just a natty line in sinister clothes? We talk all about the nastiest people in history.

1:30pm to 2:45pm
Nightmare Fuel: How to Scare your Audience for Fun and Profit
Me, Kim Newman, Will Hill, Jonathan Oliver, Deborah Hyde and Rebecca Levene


We invite you to 'enter freely and of your own free will' and find out how these authors manage to terrify readers without the benefit of CGI and buckets of red corn syrup.

A REBELLION REBORN: The Evolution of Blake’s 7

In the last decade, Blake’s 7 has enjoyed a remarkable renaissance – first with a successful audio reboot and now with a possible major new television series. The audio reimagining featured Derek Riddell as Blake and Colin Salmon as Avon, with a host of top name actors in other roles. Now, a forthcoming 60-minute documentary reveals how the new Blake’s 7 audio series came about.

In a special item on Sunday, Ben Aaronovitch and James Swallow, two writers of the new audio series, will join producer-director Andrew Mark Sewell, and Alistair Lock – the new voice of Zen – to discuss the original series and its influence, the production of the audio reboot, and what the future holds for Blake’s 7.

The Island of Silence


Aldernay is a small island off the coast of France which became attached to the British crown at the same time William of Normandy did. In the 13th century it remained attached, along with the other channel islands, when Normandy was Incorporated into the Kingdom of France. 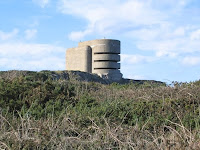 
With the rest of the Channel Islands Aldernay was occupied by the Germans after the fall of France in 1940. The Germans set up four concentration camps on the Island housing Russian and Polish POWs, Jewish slaves and forced labourers from occupied Europe. It was while working their prisoners to death that the Organisation Todt and the SS pioneered the brutalist(1) style of modern architecture. A style that became much admired by post war modernist architects who went onto inflict it upon the people of Europe in the 1950s and 60s.

(1) The beauty of brutalism is that the building bears no external relationship with its function so whether it is a theatre, a housing estate or a gun emplacement is almost impossible to determine frrom the outside.
Posted by Ben Aaronovitch 3 comments:

Oh no my ego has explo.....wait that was last year!

Now my ego has expanded to become coterminous with the known universe - so there! 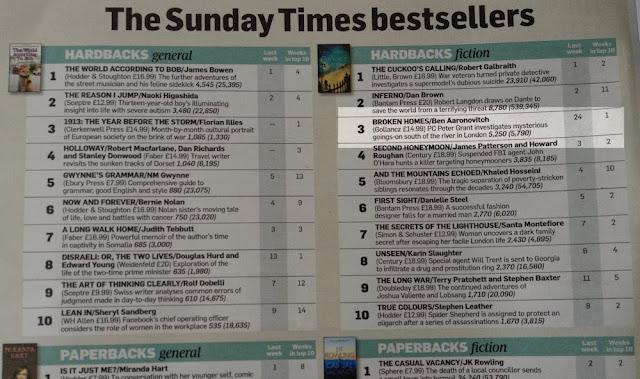