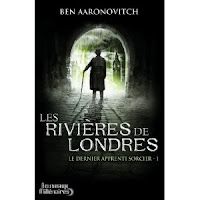 Benoît is 49 and lives in Nancy, in the east of France.
Posted by Ben Aaronovitch 1 comment: 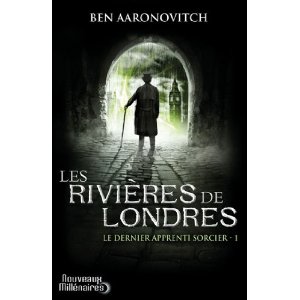 J'ai Lu will be releasing Les Rivieres de Londres on the 14th of March in a translation by Benoit  Domis.
Here is the French cover and it's good to see that J'ai Lu spent some time getting it right rather than just reaching for the nearest bit of vaguely London related Victorian tat that was lying around their art department.
Posted by Ben Aaronovitch 1 comment:

The D-Word: That Terrible Thing That Happens About A Month In

Sooner or later you slip up badly and wake up in an anonymous hotel room with sticky fingers, chocolate smeared around your mouth and no memory of how you came to be there.

You have fallen off the wagon, your diet and, by extension, your life is over. There is nothing more to look forward to now but public humiliation, pretending to be jolly and type II diabetes.
But before you fall into a slough of despair I want you to stop, take a deep breath and fucking pull yourself together! You may think what you have is an addiction but food is not the same as alcohol, gambling or heroin for the simple reason that if you abstain from drinking, the horses or shooting up you are not going to die. Abstinence, in the case of food, is contraindicated.
The first thing to remember is that, if you want to lose weight and keep it off, dieting is, like malaria and a lingering sense of injustice, for life. This is the longest of long term projects and the occasional 'lapse' is not only not important it isn't actually going to matter at all. I allow myself an indulgence once or twice a week and thus far I've stuck to the 1kg a week loss that I planned for(1).

As the first exciting bloom of your diet wears off and you find that despite your hard won loss of many kilograms your social life has failed to improve, staff in clothes shops still give you the look(2) and you still cringe when you see pictures of yourself, you'll find yourself cheating. Just a little bit something extra there, a wafer thin chocolate mint. full fat milk... what is not important it is the accumulative increase in daily calories that counts.

This is where your food diary helps, check your totals, make sure that 13 times out of 14 (or so) you stay under your calorie limit. The same applies to your weekly weigh-in, if you cease to lose weight or put it on for more two weeks running you are not retaining water or wearing heavy socks you are eating too much. From this you can see why lying to yourself is so damaging - if you can't monitor yourself you can't stop the calorie creep and you're fucked.

So say yes to the occasional binge but no to calorie creep and you too might go from having your own gravitational field to merely being designated bad guy in a Harry Potter film.


(1) That's right in a mere 52 weeks I will be merely morbidly obese.
(2) You know the look I'm talking about and if you don't then  you've never gone clothes shopping while fat. That's right - that look.
Posted by Ben Aaronovitch 2 comments: 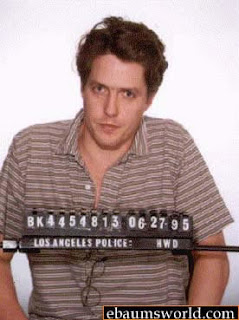 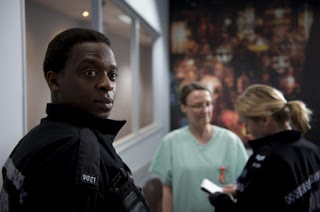 (1) His rendition of the Irregulars out for a night on the tiles had me in stitches.
Posted by Ben Aaronovitch 8 comments:

Modern Architecture by Alan Colquhoun is the sort of book you find yourself reading when you've foolishly given your character a skill or knowledge base you do not possess.
Marune: Alastor 933 by Jack Vance is another of the all too few Vance novels I haven't read yet.
Posted by Ben Aaronovitch 1 comment:

Prestatyn: The Night of the Living Teddy Bears

I love working with actors, especially actors like Sylvester McCoy. Partly it's their exuberance, their joie de vivre but mostly it's because I really have to do very little in the way of work except point them at the audience and let them go. But I'm getting ahead of myself.

Arrived to find that SFX Magazine had learnt some lessons from last year's SFX Weekender at Camber Sands the first of which was not to hold the event at Camber Sands. Pontin's Prestatyn camp was better maintained, closer to the actual town and definitely cleaner. It was also much more compact which meant that despite being, once again, housed as far away from the main area as humanly possible without being actually in a different camp - it wasn't the morale sapping slog it was last year. My chalet had  bed, a shower that worked and adequate heating - I don't really ask for much more in accommodation so I was happy.

I'd come up on the Thursday night because I was due to compère a Q&A session with Sylvester McCoy and Sophie Aldred. After gleefully joining the short queue to sign in I spent a pleasant evening meeting authors and fans in the pub while periodically being harangued by Lavie Tidhar for shaving off my beard (he seemed to take it as a personal affront).

The next morning I awoke and conducting the ritual of the drinking of the coffee prior to the salutation of the sun - it was a cold clear morning - and after a moment to ponder the mystery that is sentance punctuation I went forth. Jon Weir and I strolled into Prestatyn and stopped at the first promising looking cafe we found. Here amongst chintz and teddy bears I had sausage egg and chips.

Something about the decor spooked Jon who felt we had dropped into a North Wales remake of Deliverance and that we were about to be killed and eaten by the cafe proprietors. Fortunately we escaped and stuffed with breakfast and intimidated by the cold weather we grabbed a taxi home.

We got back only to find that the train service had been disrupted and we might be experiencing a serious Sylv and Sophie shortage (a terrible thing I can tell you). In the end Sylv arrived to put me out of my misery but Sophie couldn't get there in time. Now I'm a writer, a profession I chose in part because it doesn't involve addressing vast halls full of expectant fans - I had questions I'd prepared earlier and now inexplicably couldn't remember. Sylvester, sensing that he wasn't going to get alot of help from me, seized a radio mike and leapt of the stage and into the audience. I then got to spend a fun half an hour watching him bounce around the hall like a teddy bear while holding a delighted audience in the palm of his hand.

Actors - god bless em and all of us who write for them.
Posted by Ben Aaronovitch 1 comment:

Rivers of London will be published in French translation by J'ai Lu on the 14th of March. I'll post the cover as soon as I see it.
On the 20th of March I will be attending a School Awards Ceremony in Tunbridge Wells.


Whispers Under Ground will be released in the UK on the 21st of June. Around that time there will be a plethora of signings including, I hope, more outside London if Gollancz and/or local bookshops think demand is there.
I will be taking part in the Harrogate Crime Writers Festival some time between the 19th and the 22nd of July.
As yet I do not have a firm date for the release of Whispers Under Ground in the US but I doubt it will be any later than the UK release.
Posted by Ben Aaronovitch 2 comments:

The internet has it's limitations, I love wikipedia and I don't even want to think about life before Google Earth but sometimes you have to dig into some books. These are the current crop for the research phase of Book 4 (and some for Book 5).
A Home of Their Own, a history of Battersea Dog's Home by Garry Jenkins. The first home was actually off the Holloway Road. I've just done a research trip there where I took lots of notes and utterly failed to ask any of the questions I now realise I needed to ask.
Gangs of London: 100 Years of Mob Warfare by Brian McDonald. What's it about? It's about flower arranging isn't it? You f**cking muppet!
Posted by Ben Aaronovitch 1 comment: