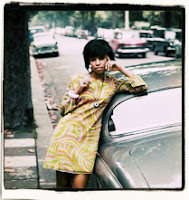 I wish more authors would record and print these types of moments. They add significantly to my enjoyment of the characters' world. I would never have thought that Hugh would visit London, as frail as he is. And Nightingale - nightmares? Wow.

Lovely piece Ben, thanks. I assume that Hugh was a little less frail 50 odd years before Foxglove Summer, he's aging normally isn't he?

Gee, I love this. It's so nice to have a bit of backstory and humanity to them both.

This is lovely - it's so nice to get a glimpse inside Nightingale's head. And I'd pay good money to read about Nightingale's first encounter with the new goddess of the Thames!

1966 - presumably the point at which Nightingale (like Varvara) started ageing backwards? (And I do like the theory - not mine - that relates this to the first Notting Hill Carnival and the revitalisation of British culture by the influence of Afro-Caribbean immigrants. Not that expect you to comment on this...)

Brilliant. An amuse-bouche for the mind. Thank you.

Bring more of Hugh and Nightingale's back-story to light- this is good stuff, don't leave us in a wonderland of pondering! Super excited for the release of The Hanging Tree.

Oh dear, dodgy grammar first sentence. You use "since" to mean "after", not "due to". So it should be
"Since the war it had become impossible, during his infrequent visits to London, to persuade Hugh to visit the Folly *so* we naturally gravitated.."

I recall being appalled by dodgy grammar in "Whispers" but by the third reading they'd disappeared from me. Perhaps the same happens to you and your editors?

For Dave Heasman, the sloppy grammar is intentional, as it is Peter's voice, who often sets himself against the rules. Having said that, I do not find this sentence upsetting.

Although I am happy to have a bit more from Hugh, I found myself wishing the visitor to London was one of the other survivors, if nothing else, to whet the appetite.

Sadly, the Hanging Tree seems to be moving even farther away.

I have been waiting so so so long for Hanging Tree that a bit like this gives me hope that it is actually out there, somewhere. At this point, I'm not sure that it can possibly live up to my desperate expectations, but darn it I certainly hope so. Lovely bit, doesn't give a thing away does it?

Please, sir, may we have some more?

A lovely glimpse of history.

I think it very unlikely that the nightingale would have used a word like 'normalcy' unless, as is not the case here, he was referring to a mathematical property. It's a jarring as the VW Rabbit. Please, do your readers a favour and throw out that dreadful Merriam-Webster. Buy yourself a proper dictionary.

But... don't ever tidy up Peter's grammar - his apalling colloquial modern English keeps me smiling.

I have no idea who this Miriam Webster you speak of is. I rely on nGram to help avoid anachronisms. Normalcy became popular in post war Britain particularly with reference to the period prior to the war. :)

I agree that 'normalcy' doesn't sound right coming from the Nightingale. Love the little snippet of story, though.