I'll admit that I'm reading A Princess of Mars, by Edgar Rice Burroughs, primarily to see whether all the places where I went...where the fuck did that come from... were in the book or added by the screenplay. If I'm feeling particularly geeky I may even write a blog about it.
I was never really attracted to the Tarzan novels, or the Tarzan myth structure really(1), but I like a good planetary romance and the covers of the Panther editions had semi-naked women on them(2).
I remember The classic[sic] Family d'Alembert series as being a fun space opera in the classic mould so I thought I'd grab the kindle version of Imperial Stars (another fine product of the SF Gateway - curse you Gollancz and your time wasting temptations) and see whether it was any good.
(1) I'd love to claim it was my virtuous reaction to the whole racist mighty whitey raised by apes thing(3) but I think it was probably because it wasn't set on Mars!
(2) I was twelve, it was the seventies - cut me some slack here.
(3) I'm not interested in discussing this so don't start.
Posted by Ben Aaronovitch 3 comments:

Paris in the Spring

Seized by the joie de vivre that often grips a writer in the short gap between royalty statement and tax return I decided to grab the Evil Monster Boy and leap upon a Eurostar bound for Paris. Arriving in the evening we booked into a Hotel near the Sorbonne and hunted out supper at the Pre Vert where we did the whole English oh-my-god-didn't-know-food-was-supposed-to-taste-this-way thing under the amused and patronising gaze of the French patrons.
The next day involved walking a tremendously long distance to find that the Eiffel Tower had a queue as long as it was tall and that your supposed to be SILENT inside Notre Dame before selecting another restaurant for even more food. After that we retired to the hotel and slept the sleep of the stuffed.

Before heading for Paris I, as a matter of course, had informed my French publisher J'ai Lu that I'd be popping over on the off chance that wanted me to sign some books, do some paperwork... I dunno. What I wasn't expecting was a day whisked around Paris to be interviewed by 2 flavours of internet TV many bloggers, a really delicious meal on a restaurant on the Seine and a fun signing in Paris's only dedicated Fantasy book shop - Librairie L'Antre-Monde. There I met lots of people who were nice to me despite my inexplicable ability to speak French.

The next day me and the Evil Monster Boy headed for the Gare du Nord where we bid tearful farewell to the city of light, culture and enormous lunches. We vowed as our train headed into the long culinary darkness that is the Channel Tunnel that we would return with a larger vocabulary.
Posted by Ben Aaronovitch 1 comment:

My Own Personal Golden Age: Part 1

The Golden Age!
They say the golden age of Science Fiction is 12 which was when I read a book a day and cleaned out my school and public libraries' SF sections in under six months. But my personal Golden Age started a year or two earlier with one particular book plucked almost at random from the children's shelves of the this library here...
Which was located just behind my primary school (Brookfield) so as to be convenient for book procurement after school. Now this was back in the early seventies long before Young Adult fiction had been invented - back then you had an undifferentiated 'children's section' and then everything else. I could have put my hand on Anne of Green Gables but thank the power that puts the universe in motion that it was this book.... 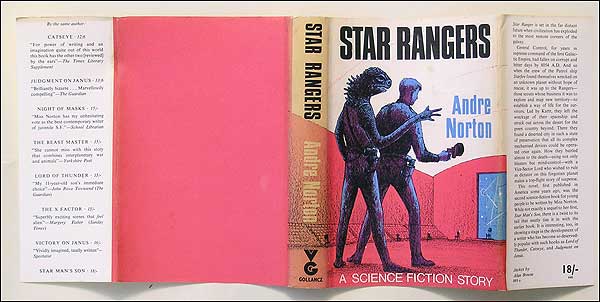 Star Rangers by Andre Norton and from that point on nothing else would satisfy that itch than science fiction. From then on I was an omnivorous science fiction and fantasy reading machine - in a fever of completely indiscriminate consumption that didn't abate until my mid-teens. It's only now with the benefit of hindsight and the internet(1) that I can assess the impact this had on my own career.
Lets start with the women!

If you don't already know this: Andre Norton was the pen name of Alice Mary Norton whose prodigious output dominated, along with Robert Heinlein, the children's section(2) of my local library. Thus my golden age started with a woman and was massively influenced by the wave of female pioneers that crashed through science fiction in the late sixties/early seventies. In particular Ursula K. Le Guin, Anne McCaffrey, Kate Wilhelm and Octavia Butler(3).

I'm hesitant to talk about a female perspective but I do think their work had a greater focus on the social and interpersonal impact of technological change. Long before I had any conception of the plight of refugees in the real world I was haunted by the image of the Dipple that opens Andre Norton's Catseye. Kate Wilhelm did a number of surprisingly gentle post or near-post apocalyptic novels, including Where Late The Sweet Birds Sang and Juniper Summer in which the focus on the network of relationships people build around themselves are more significant than the disaster that enfolds them. A fascination with the way different societies and people would be shaped by their environmental constraints and opportunities informed the work of Ursula K. Le Guin, Octavia Butler and Anne McCaffrey.

None of this impacted on the conscious brain of the teenaged omnivore that was tearing his way through seven books a week except as a vague sense that some books had more 'something' than others. It wasn't until much later that I recognised it for that elusive literary quality 'depth'. When I finally became a writer myself it was the work of these women that became the instinctive benchmark by which I judged my own work.

Later in part 2: more women and some men and some small furry creatures from Alpha Centurai.
(1) Without which I wouldn't be able to name half the authors I read.
(2) at least those bits of the section that were worth reading.
(3) There were plenty more but these were the women whose books I was hoovering up in that period.
Posted by Ben Aaronovitch 4 comments:

News at Six: Are the Northerners Right? 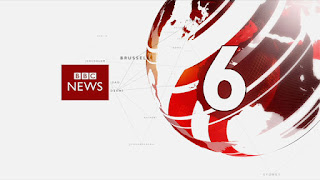 Four weeks ago I started my epic quest to find new ways to procrastinate discover whether those Northerners are right and that the BBC News has a massive London bias.
To this end I started logging the weekday BBC News at Six(1) and determining how each region fared. I used the three nations + the official regions to avoid definition problems but I have occasionally combined the North East, the North West and Yorkshire & Humberside for an aggregate Northern result. Any who objects to this methodology should feel to do their own fucking survey.
I have two caveats, Scotland (and to a lesser extent Northern Ireland) technically aren't covered by National stories that involve devolved powers but I've retained national for simplicity sake. Given that Scottish MPs can vote on these issues and that 17% of the current cabinet are Scottish it doesn't seem that outlandish. The other, more important caveat, is that I'm doing this entirely for my own satisfaction and to test whether my prejudices are right or not. These results do not reach any kind of sociological or social-policy standard.
The totals in the last four weeks are thus...
Stripping out the national and international news and aggregating the north we get the following.

As you can see the North actually gets the most coverage but.... and this is a big but - the North is by far the largest region with 24% of UK's population. If you rank the regions/nations by the ratio of news to population you get a very different result.

This shows that that the North is indeed apparently under represented, given the size of its population, However I did notice a wide fluctuation in coverage from day to day and week to week so I think it'll probably need at least six months of data to give a wide enough sample to satisfy me.

(1) Believe it or not I used to do this for a living.
Posted by Ben Aaronovitch 3 comments:

The Joy of Treatments

One of the things I didn't miss when I shifted to prose(1) was the ritual known as the 'Writing of the Treatment'. This is when you have to convince 'the money' that they should give you some cash so that you can make your nice TV programme. Since making an hour of TV now costs more than a decent house in outer London this is not a decision anyone wants to make lightly. Indeed a great many people earn a good living by not making these decisions and use that to push up prices in outer London ever higher(2).  Recently I have been sucked back into the wild and wacky world of television production and have found myself writing treatments again. I can't be the only person who views this prospect with alarm and despondency so I thought I would provide these handy tips.

1) Make sure you have a clear space on your desk so that when you repeatedly bang your head on it you don't damage anything valuable.

2) If you're working with a team make sure you have agreed an approach with everyone else. You're colleagues will find it much easier to sell a treatment they voted for - even if they were drunk at the time(3).

3) Make sure you know your intended audience. Will the treatment go straight to the man from Del Monte or will you have to penetrate multiple layers of gibbons to reach him or her. You will need to tailor your approach accordingly (see below).

4) If the person you're pitching to is suffering from a bad case of gibbon infestation then the chances are they will be pushed for time. Gibbons like meetings at which they waste time and produce meaningless noise(4) which means the person that does all the work doesn't have much time left over to actually read your treatment. This means they do not want to be mucked about and will make a decision within the first two pages of the treatment.

5) So make sure that you have heart of the pitch is in those first two pages. There's no point subtlety working in your ideas amongst the character notes and episode outlines the decision will have been made.

6) Proof read your document carefully to ensure you don't come across as semi-illiterate.

7) A couple of illustrations is nice but don't over do it. Nothing says padding like a pitch with more pictures than text(5).
(1) Yeah like that was voluntary.
(2) Although some of them are now repeating the process in Salford.
(3) I can't recommend this strategy strongly enough - nothing eases your recalcitrant colleagues round to your point of view like a huge meal and a couple of bottles of wine.
(4) And faeces of course.
(5) I know TV is a visual medium, so does the person you are pitching to but TV is not short of striking images what it's short of is good stories.
Posted by Ben Aaronovitch 2 comments: