I couple of reviewers have commented on the presence in my books of what some might call British-isms which others might call English. Sorry, cheap shot, couldn't resist it, moving on. Sometimes this is couched as a positive, sometimes as a negative but mostly as a minor drawback that is outweighed by the books good points (phew). My initial reaction, like most British people, is to snarl in unseemly fashion and go into a long rant about how 'we seem to be perfectly capable of figuring out American-isms (called by some people English) from the text why can't they' blah, cultural imperialism, moan, short sightedness, insensitivity etc etc.

I was halfway through a moan of this type when I asked myself - do we? So, in a spirit of inquiry, because it does you good to periodically test your assumptions and also because I'll do just about anything other than get down to the business of writing, I decided to check. I've taken random chapters from the British editions of American authors - sticking to books set in modern America (because my books are set in modern Britain).

King Maker by Maurice Broaddus
Published by Angry Robot (2010)
Chapter Seven (p166-187)
Actually there's quite a lot of drug jargon in this chapter which I didn't count because I suspected it was new to a lot of people on both sides of the pond(1).

(1) Broaddus evocation of the junkie life is particularly brilliant here.
(2) I'm not sure if this isn't Indianapolis specific or not.

American-isms: Restonic(3), Little League Baseball(4)... and that's it. A quick flick through revealed pavement rather than sidewalk - this book has been doctored. My thesis has definitely taken a hit.

This is why you should check your facts before embarking on a good moan, especially a nationalistic one.

(3) Is this a real brand name or made up?
(4) we know what baseball is it's the 'little league' that's foreign.

American-isms: parking lot and.... bloody hell my theory is going down in flames.

Mind you it's been thirty years since I first read this book, scanning the chapter reminded me how good it was and now its been recycled into the reading pile.


Seriously I'd better choose something firmly in the vernacular to retrieve my honour...

Surely the aggressively American (and I mean that in a good way) Jim Butcher is going to help me out here.

Notes: unless I'm mistaken Orbit changed leash to lead but kept sidewalk - interesting. Strictly speaking I could have included mail as an Americanism because while we use mail (as in Royal Mail) we generally refer to the post (the post has arrived, post box) but I decided that would be a sign of desperation.

Now to the last throw of the dice (or is it die?) 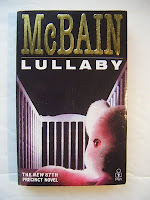 Surely the 87th Precinct novels, from which I learnt, in context, that an Oldsmobile was a car and that Oxfords were a type of shoe, would bear me out. Shall we have a look?


I'd say that the basis of the moan is... well marginal at best. Without comparing a range of American editions of British books I'd say it was unlikely that more American-isms were let through than British-isms going the other way.

I'm off to complain about something else.
Posted by Ben Aaronovitch

Heh, [SALUTE] I always respect this kind of self-checking.

Of course there's more to the story here, such as:

1. the fact that British readers sometimes source the American editions of books, by one means or another (ducking out to borders while at a convention or on a business trip; getting a friend to send them over, etc.), either to just get the next book in a series quicker or, in some cases, because they *prefer* the un-mangled text as she was writted. presumable the same thing happens in the opposite direction, but due to the relative sizes of the publishing industries (sheer number of books published) each size of the pond, I would guess that the British readers who do this end up with quite a concentrated collection of US editions and thus a particularly good familiarity with the US lingo.

2. TV is also a factor. While books can be edited to swap Americanisms for Britishisms or vice versa, that's much less likely to happen with TV dialogue, on-screen signage, etc. And again, given the relative sizes of the industries and the number of hours of programming flowing in each direction, I assume British viewers get a lot more exposure to US vernacular than vice versa.

But of course, both of those assumptions ought to be checked. By someone less lazy than me. =;o}

I'd also say that, while *complaining* that an author writes in their own vernacular is obviously selfish and silly and deserving of a riposte, merely commenting on it is fine, and *asking for help* with the lingo it is entirely reasonable - As is responding with "Well I'm a bit too busy to answer all your specific questions, but here are a couple of links that may help you. Also, Wikipedia is (usually) your friend."

I see Peter comes by his urge to read plaques on walls honestly!

Yes indeed, Restonic is a brand name of mattress (see also www.restonic.com). Charlaine Harris uses lots of USAian brand names in her books. "Section 8" refers to a section of federal (as opposed to state) law/regulations which helps provide low cost housing/rent assistance to people who can't afford it otherwise. (I believe that might possibly translate to "estate" housing where you are, which I think equates to our phrase "the projects.")

The only translation for "Jakies" I can find is at urbandictionary.com which defines it as Glasgow slang for an alcoholic. "Fishnet" and "hose" are two different things. Fishnet is the classic hooker-wear criss-crossed seamed netting, hose usually means pantyhose and is sheer, or one solid color. Well, you can say "fishnet hose" but generally the phrase is "fishnet stockings."

I love the authentic British vocabulary, I wouldn't want it changed for anything. So I have to stop and google a word or two sometimes, I enjoy learning new things! Like, I didn't know that you don't use the word sidewalk -- the word pavement here generally means the street proper, not the bit on the side where pedestrians walk.

As for your books, in the first paragraph of Moon Over Soho I find the words "chavette" and "squaddie." Then there's Biro. And the word "nick" to indicate a police station, and "section house" -- over here, cops don't routinely have sleeping quarters in police stations, though fire-fighters do live and sleep in firehouses when on duty.

I could go on and on but hell, now I have to reread them both. Bother.