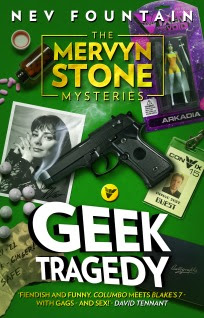 I don't normally review and I almost never recommend a book but in this case I'm going to make an exception. Partly because it kept me up all night but mostly because I found myself laughing out loud every two pages or so.

Stone, a man whose career has not prospered since Vixens was cancelled, arrives at an anonymous hotel where he will a guest at VixCon15. His low expectations are almost immediately confirmed when he is thrust back into the slightly sweaty arms of Vixens From the Void's fandom which - ...only existed so that Xena Warrior Princess fans had someone to pity. (p17)

And that's about as far as I'm willing to go without spoiling the plot, obviously there is a murder and a mystery. Our hero rises to the occasion, in more than one sense of the word. The setting will be hilariously familiar and appalling to anyone whose ever attended, guested or organised a fan convention and will be hideously fascinating to anyone who has not. The characters are well drawn and manage the difficult balance between caricature and believability - I've met some of these people, hell I've been some of these people. Nev Fountain keeps the mystery and the comedy in perfect harmony so that you find yourself laughing and second guessing the plot at the same time.

I'm off to buy the sequels - you should too.