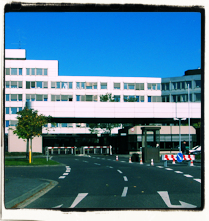 
Moments are little bits of fiction that don't really rate being called a short story and are unlikely to ever be incorporated into a longer work. Needless to say they still constitute a finished work and I assert my copyright etc.

I’d only been back at Meckenheim for a couple of days when the reports arrived from London. I’d been out in the East, in Radeburg recovering a Case White artefact that the local police had uncovered from a suspected Werewolf cache. Don’t let the name excite you these jobs are always the same. I drive across the country, sign for a sealed package and drive back. I rarely get to spend even a night out on the town because the local boys can’t hustle me out of their jurisdiction fast enough. You’d think the bloody things were radioactive, they’re not you know, early on I ‘borrowed’ a Geiger counter from the forensics lot and started checking them before I put them in the car.

Judging from the weight and size of the package I’m relatively certain that it was a diary or ledger. If so I was in no doubt that my next task would be to scour through it for names to add to our database. My chief has often complained that our obsession with the Nazi past is holding us back. It’s certainly generated enough paperwork.

‘Sooner or later this national obsession has to pass,’ she said once. ‘We’ve all become far too comfortable playing this role.’

Although she’s never once said what exactly it was holding us back from and I for one was not in a hurry to find out. Like my father I favour a comfortable Germany it’s about the only thing we’ve ever agreed on.

I didn’t ask to join the Department for Complex and Unspecific Matters in fact I made a spirited attempt to blow the interview. When the Chief asked me why I’d joined the Bundeskriminalamt I told her it was because they wouldn’t have me in Cobra 11. That should have been it but instead the Chief smiled her terrifying smile.

When we’re not transporting dangerous artefacts or chasing rumours of possessed BMWs, never Mercedes for some reason, we work office hours at the KDA. I like to get in at eight so I get an hour to myself before the Chief and the administration team arrive so I wasn’t best pleased to find an email from the secure communications section that they had a message for me. Protocol dictates that I collect such documents myself so down I went to the basement. I read the first page summery while I was still in the secure communications room. Then I asked the officer in charge to send a message back to London.

They don’t have chairs in the waiting area of the communications section so I propped up the wall and speed read the bulk of the message while I was waiting for a reply when it came I put both in my secure briefcase and took them upstairs.

The Abteilung KDA was once a much bigger section and as a result we have a large number of empty offices at our end of the second floor. The fact that none of the departments have tried to appropriate them for their own officers should tell you something about how we are regarded by the rest of the Bundeskriminalamt.

I found the Chief in her office standing in front of the window looking out on her unrivalled view of the car park.

‘The Nightingale has taken an apprentice,’ I said.

The Chief is a tall, slender woman with a long pale face and red lips. She favours black skirt suits cut in a very elegant old fashioned style and I’ve heard her described as looking like the CEO of a corporation run by vampires.

I’ve faced a vampire and the only reason I’m able to talk about it now was because I was carrying a flame thrower at the time. So, no, I think she looks like a woman who needs to get out in the sun more.

‘Ah,’ said the Chief. ‘That’s unfortunate. How certain is this?’

‘The Embassy has confirmed it.’

She turned to check that I’d closed the door behind me and that nobody else could see or hear.

‘Shit, shit, shit,’ she said. ‘Why is it always bloody London? I told them we needed someone at the Embassy full time.’ She tapped a long blood red fingernail on her desk for a moment and then glanced back out of the window to see if the rain had stopped.

The Chief has a favourite smoking place amongst the trees at far end of the athletics track. She smokes dreadful f6 cigarettes but I’m certain these are an affectation like her Saxon accent - part of her disguise.

‘Details,’ she said as she jammed a cigarette into her long black holder.

I summarised the summery. She interrupted me only once and that was so I could light her cigarette.

‘What do we know about this Peter Grant?’ she asked.

‘African mother, English father, joined the London police two and a half years ago,’ I said. ‘The London Embassy have promised more in the next few days.’

The Chief stubbed her cigarette out on the nearest tree and jammed a fresh one into the holder.

‘We should have had someone in London full time,’ she said.

It had always been the consensus in the Federal Government that the supernatural had been ‘contained’ and the KDA’s job was that of a glorified cleaning service. The Foreign Ministry wasn’t about to allocate a valuable diplomatic position to someone whose job description could best be described as ‘hanging about in case something magical happens.’

Only now it had.

‘Do they have more information on the murder?’ she asked.

‘Four murders now,’ I said. ‘One of the victims was an infant. They’re sure the case is linked to Nightingale breaking the agreement but they don’t know why.’

‘So much for “contained”,’ said the Chief. ‘Do you know what this means?’

I’ve learnt not to interrupt the Chief when she’s in full rhetorical flow.

‘This means,’ she said blowing smoke, ‘that we’ll have to expand our own capabilities to match.’

She looked at me in a way that did not entirely make me feel comfortable.
'Tobias,’ she said.

‘Have you ever considered learning magic?’

Thanks for posting this in English, though Google Translate did a pretty decent job last week.

Thanks for posting this. I enjoyed reading it! I have devoured all your books and am thankful for any new material! I am curious how the character of Tobias Winter will turn out. In this "moment" it is especially interesting to see your take on German bureaucracy...

And to prove that Germans are indeed nitpickers, I would like to give you some feedback:-) ( Even though I am aware that you have not polished it as thoroughly as for publishing):

Wouldn't Tobias be back in Meckenheim instead of at Meckenheim? After all Meckenheim is the town and not the Square the BKA-Office is situated at, or is it?

I know that you write the full "Bundeskriminalamt" because you mention it for the first time, but if you are in any way involved in law enforcement or the judicial system, you would use "BKA" when talking/thinking (similar to how one uses FBI).

Also, shouldn't it say "The London Embassy has promised.."?

I (im)patiently await your next post, book or comic.

He has a flat in town so I'm going to give myself some leeway.

Thanks for the notes on abbreviations.

I love it, and the glimpse of what magic is like in places outside England, but here's a nitpick: I think you mean "summary," not "summery."

Yayyy!!! more writing, different country. Who is Tobias Winter? I must have missed something during the long, long wait for Hanging Tree and will therefore go in search of... "I am (as was stated above) so thankful for any new material."

I love love love this. I'll leave the nitpicking to my fellow Germans but man, F6 and saxon accent. I was born and raised in saxony and my dad used to smoke F6. Gave me a big smile to read that line.