At Last The Truth! Where the Story Really Starts

It is an epic tale of one man's quest to feed his family(1) and restart his career no matter what the odds. It all starts back in the far of days of 2005 when I still thought I had a career in scriptwriting(2). There will be spoilers for both Rivers of London and Moon Over Soho so if you're spoiler averse look away now....


Magic Cops - Does what it says on the tin.
Memory is the weirdest thing. For the longest time I thought that I'd got the initial idea from an early Sci Fi Channel promo for The Dresden Files TV series. But looking at my diary the other day I saw that I was working on the idea as far back as 2005. In fact I a couple of sample scenes written and the start of an outline blue tacked to my walls. Since the series didn't air until 2007 I've had to go rummaging around in the carelessly stuffed spare room of my memory and my best reconstruction is simply this...

Prime Suspect meets Ars Magica - now there's a pitch you couldn't make to a British producer. In this version Peter was a black woman with Jamaican parents but Lesley and Nightingale were pretty much how they ended up in the books. There was going to be a whole team of wizards in the classic ensemble cop show style including a new age witch and someone practising a Non-European tradition from China or India.

At one point I toyed with the the idea of Simone (Peter as was) discovering or, more precisely, being afflicted by an ancestral spirit - that bit was strongly influenced by Due South particularly the episode where Constable Fraser opens his cupboard to find that his dead father and a bunch of Native Canadian elders have taken it over as a sweat lodge. I liked that intrusion of the fantastic into the mundane - I also liked Fraser's matter-of-fact acceptance of the situation.


When I start a project I often find myself with a few scenes or sequences that are, for want of a better term, vivid. Moments of narrative in which I can almost see, taste and smell what's going on. It's easy enough to take a concept, turn it into a pitch and then mechanically spin it out into a plot but unless you have these brilliant beads to hang on that thread you can never be sure the book, series or film is going to live. Magic Cops had several such moments right from the start - some of which survived all the way to Rivers of London.


Simone trying to take a witness statement from a ghost while guarding a crime scene. Not in Covent Garden, because producers hate central London locations, but in Worship Street near Liverpool Street Station. This scene, even down to the "Pisst, guv, I saw the whole thing," line was consistent all the way through to Rivers of London.

Another survivor was Nightingale 'recruiting' Simone in a Japanese restaurant - although the restaurant in question was the Moshi Moshi in Liverpool Street Station. 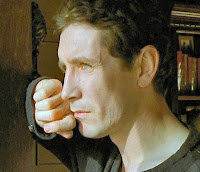 You can't see it from the picture but the Moshi Moshi is essentially a Sushi Bar inside a transparent perspex box suspended ten metres above the platforms of Liverpool Street station. If you can imagine Paul McGann in there talking about ghosts and werewolves to a black Londoner with the 19th Century roof vaulting overhead while thousands of commuters stream past oblivious to the strangeness - then you can imagine why I thought that was a visually arresting scene(3).


While not a set piece another thing that survived all the way to Rivers of London was Lesley May as golden girl and apple of the police forces' eye. In fact not changing Lesley to male when I switched Simone would lead to some very interesting meta-thematic confusion amongst my editors and many of my readers.

While Magic Cops is definitely the seed that led to Rivers of London its roots spread out further to another project which I will discuss in next week's exciting(4) instalment 'The Curiously Unavoidable Harry Potter.'


(1) Well just the Evil Monster Boy really but trust me - that was expensive enough.
(2) My career had been effectively dead since 1997 but it's amazing how far you can go on hope and a stubborn refusal to face reality.
(3) If you can't then you're probably a gibbon.
(4) Well probably not exciting per se but interesting...to me at least.
Posted by Ben Aaronovitch

Labels: At Last The Truth, Rivers of London, writing

I think it's exciting! Back in the day I had delusions of Being A Writer (ha, no, sorry, wrong number), and I still love reading about writers writing.

I keep checking my Kindle Fire for Whispers, but alas I didn't order the time-travel option which allows one to get books before they're released, more's the pity.

ps-- the episode of Wire in the Blood where Tony went to Texas was a hoot and a half. Very authentic!

Oooo. That's so interesting. I love pondering the way stories could have turned out (though I must say, Simone will remain my enemy regardless *crossface*). Also, I'm glad Peter wasn't a woman. More appealing that way. :)

(Leslie, for a moment I thought you actually meant you were checking your Kindle for actual whispers, had a bit of a WTF moment ! I know, I'm slow.)

Ooh, no, I don't see Nightingale as Paul McGann at all. But the location sounds wonderful.

Any idea when the Audible version of Whispers will be released? I had an idea that it was planned to be simultaneous with the book?

Just relistened to Moon over Soho - and I have to take issue with Star. Simone isn't an enemy, she's a victim, and the scenes near the end where she finds out exactly what she's done are pure tragedy. That's the advantage of writing in a light-hearted style. It makes the sad bits so much more shocking.

Heh, maybe this explains why geography is so important. (IMO: what Redwall is to food, Peter Grant series is to London locations.) You were actively thinking about where pieces would be shot for a TV show, whereas novels can get away with being non-specific about such things. And now it's a thing and of course important to the magic system.

Nighringale=Bill Nighy in my head despite the ageing backwards thing.

Nighringale=Bill Nighy in my head despite the ageing backwards thing.