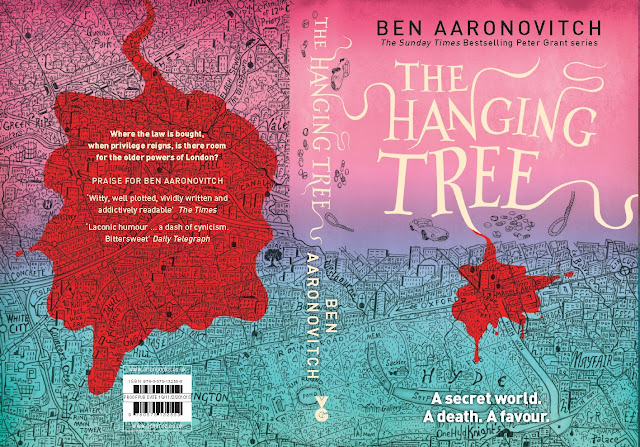 Sigh. The insanity of trad publishing: An e-book that costs 9.99 (no stock to hold, no warehousing, no printing costs) but if I want the paperback I have to wait another year?

All to protect their precious (and falling) hardback profits (which you don't see).

Are they so blind they can't see they're doing exactly the same thing that the record companies did? And trad publishers can't win this game either. They need to evolve or go extinct.

Well, I hope you get a better percentage on ebooks - otherwise you're being ripped off.

(No, I don't expect you to approve this comment. I just felt the need to say it. I like your books a lot, Ben, but not enough to line the pockets of criminally minded businessmen.)

Hardbacks don't cost much more to print than paperbacks. You're paying a premium for getting the book /now/ rather than in a year. The ebook will drop in price once the people willing to pay a premium to not wait a year have bought it. It's the same reason that DVDs that have just come out cost more than ones that have been on the shelves for a couple of years.

I like your books enough to line the pockets of criminally minded businessmen in two countries.

I am overjoyed by the news that another volume is ocming our way. I cam late to the party and began reading the series last year. Ever since i have been hooked.

Mr Arronovitch, ever since the publication of 'Rememberance', one of your books has been a permanent fixture on my bookshelf, 'Rememberence' was an exceptional adaptation.

As a wannabe Sci fi/Fantasy/horror writer who dabbles in screenwriting, graphic novel scripting and novels as well as the usual entries into short story competition, i draw inspiration and enouragement form a great deal of writers, you are firmly in the list of the few writers i admire.

I think the Rivers of London series a cracking good read and all the genre jokes (and the Monty Python references) are delightful.

i am greatly looking forward to this publication!

I love trying to work out what the story will be about from the blurb and particularly the map. I have a feeling Tyburn may have a role in this one.

(I also love that due to haunting your amazon page, I managed to pre-order the ebook at five pounds cheaper!)

Lovely cover. Is that a Stephen Walter map? He's a perfect match for you; all that obscure London detail. I've got a print of his Ealing map. You should see what he drew for Hanwell based on the Anglo Saxon name:)

Do we get a location map for the new novel NOW please?

(sorry, but this time you'll not beat my bitching by being fast with the map *g*)

Is there a reason that Amazon has moved the publication date from November 2015 to July 2016? I'm waiting impatiently for the next one to come out and I'll be gutted if it's not for another 10 months!

I just got the email from Amazon, too. Not cool. Totally not cool.

I was counting the days until the new book arrived... and then the release date got shifted to next year. Not just next year but the middle of next year. Was the Nov 2015 date a mistake by amazon in the first place?

The 19th Nov 2015 date was up on one of Ben's sites, but publisher's will move release dates as and when suits them, to avoid conflicts with other release's... Not allot the author can do about it, we as his readers have few if any options to speed up the release.

So basically put down the pitchforks and flaming torches, as screaming at Ben may encourage him to forgo the joy of further enlightening us on "Falcon" issues...

Not just Amazon I had the audio book on pre order that's been changed too :( gutted was supposed to be released right by my birthday :(

Yes I am very sad about the pushed release date too :(. Especially since I had timed my re-read PERFECTLY! I am now 2/3ds of the way through Foxglove summer and don't have to work tomorrow. It would've been perfect. Alas!

Gollancz seems to be a UK only publisher. Any idea which publisher (criminally minded or not) is publishing it in the US?

Sigh.
June 2016. Since I have waited this long I can wait another 5 months (especially since I have no choice in the matter), but it is hard, hard, hard! Books 1-5 are in constant rotation on my iPhone, and I want more! I sure hope the subsequent books really are in the pipeline.

Mr. Aaronovitch, I love the way you write, and the way Kobna Holdbrook-Smith reads. Thank you for all the pleasure you have given me.

The release is further delayed to mid Sept 2016 (for the audiobook), is the delay due to the publisher not being able to release the book or because the book isn't finished being written? I am so confused.

Noooo! Another change to the publication date :( Now It's October 2016. I started to worry that The Writer was ill or something, but now I wonder if it's the publisher. Hopefully it is.

I love the way you write too Mr A, thank you.

And again until September 2017 - yes over two years late!

Wait, so the book is completely(?) finished but the publisher is messing with it? :'( But why?

I, too, am disappointed at the latest postponement of The hanging tree. I will have had it on pre-order for over two years...if it is published on 17 September 2016 and not postponed again. In which case it may become three years.

My Amazon (USA) now has the paperback at January 2017. Sigh. For someone hooked on the audiobooks, graphic novels just don't cut it.

I followed the link from fantasticfiction.com to pre-order the audiobook. I get a message that says "This title is not available for you...Sorry, this title is no longer available. Please try using the search feature as another version of this work may be available. If you think we've made a mistake, please contact Audible Customer Care..."

"I will be appearing at the Edinburgh Festival on Friday

Perhaps someone in Edinburgh can ask him what's going on. Or a little nod and a wink to eager fans here wouldn't go amiss

Please tell me the September 2017 release date is a mistake?

We went to a London Book Week meeting where Ben said the release would be September 2015 - why 2 years late?

I got a July 4th 2017 for the Hanging Tree, Kindle addition. Is this a re-release? The title sounds familiar or is it because I have had it on my to read list for so long?

Just got an email from Amazon - delayed until July 2017? I paid for it a year ago, what's the hold-up? No, more importantly, what's the reason for not explaining the hold-up? I could understand "The author is sick" or "the computer ate our only draft" but tell us something!

I just got an email from Amazon. It said "Hanging Tree" would be delivered 4 July 2017. That sucks.

I, amongst many other await publication of the next book with great anticipation. as the publishers cannot decide when to press the big green button on the side of the press a question comes to mind. Have you actually written it yet?